a journalist reclaiming intuition from his dead brother

Adam, 40, married, tells his story. He works in journalism and has wished for a miracle during the last couple of weeks. He hopes for a call from a leading national newspaper to ask him to be media partner for a congress.  The host asks who would not like the miracle to happen. Adam answers his father maybe. His father always said that you have to work hard in order to succeed. conditioned mindset 1: Success is the reward for those who work hard. The host tells the participants in the off that this opinion possibly results in a father’s wish for the son to not succeed. Back with the client the host asks what he wishes to be easygoing. Is success or recognition the goal? After several other sub-stories the host tries to limit the projection to success as clear goal. The client also mentions that a trip to New York would be success to him, but the smooth organization of the congress and media recognition as well. The meandering description of the problem indicates that the client actually doesn’t know what he wants from life and from the projection itself. Therefore the projection turns into a “general research project” as the host puts it, that tries to find out what the client’s unhappiness and anxiety causes.

The host suggests following representatives:
1. focus F = Adam
2. miracle M
3. Successful constellation SC = exception to the problem = systemic concluding question:
The client mentions two occasions: He once studied for an mathematics exam with a female classmate and although he had always been a complete nerd in natural sciences he makes the top score. The second occasion was a book that he had written on peace research together with a woman that ultimately was the reason that he got a job with the Austrian chancellor.
The host inquires if the client believes that the successful constellation is his cooperation with a woman. The client denies that at first but then realizes himself that it was the case in those two occasions and that the peace congress will be organized as well by him and a woman.
4. father P
5. recognition and happiness RH (later turns into the goal G)
6. conditioned mindset CM: CM＃2 A remark that the client’s father dropped once when he was talking to a neighbor that corresponded the failures of his own son: “We also have such a looser.”
7. goal G = success (later substituted by RH) 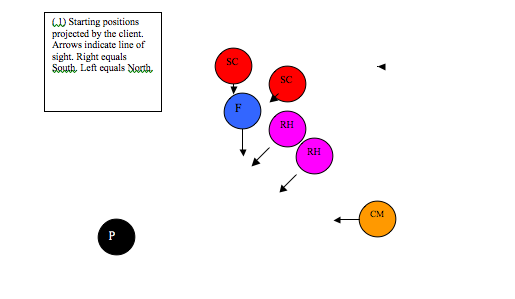 The initial projection in picture (1) by the client turns out to not correspond with the reality, indicating a distorted self-perception. There have been taken not enough representatives into account and it takes a while until they have found their positions. Recognition and happiness RH are split as well as the successful constellation SC; they are therefore indicated with the respective colors twice. The host and the representatives are irritated because the client splits two roles into four. The two representatives for the successful constellation articulate both that they feel themselves as the clients parents instead of male and female part of the successful constellation. Recognition and happiness RH appear to be together the goal G. The father F looks disoriented to the floor. 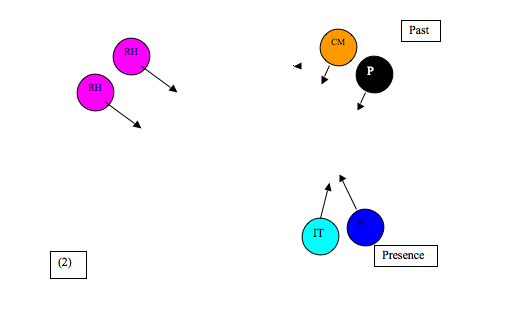 In picture (2) the successful combination disappears altogether. The conditioned mindset CM takes its new position next to the client’s father, to whom it perceives most connection. The male part of the successful combination transforms himself into the client’s intellect IT and takes a new position left from the focus F. Both focus and intellect know each other very well and seem to be good friends.

To establish further points of connection in a rather confusing beginning of a system projection, one of the representatives suggests the introduction of a timeline, which is then introduced by the host adding elements of a goal changing projection (GP). At first only past and presence appear.

Nevertheless there is great confusion and it seems impossible to find a solution to the conflict of the client. The host allows therefore the representatives to move around freely and try to find a suitable position in the picture. It becomes very obvious during this period that the host has lost complete supervision of the process and that the system automatically takes over the system immanent mode of correction. In such situations the host whose main function is to be a facilitator has to take him or herself back and let the system or respectively the representatives work. 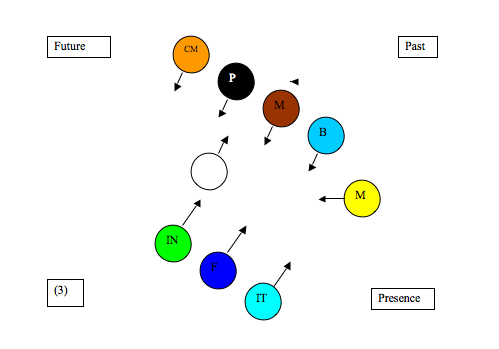 The projection (3) manifests itself as the representatives are given freedom to find the position that feels right. The white circle indicates the client Adam who was allowed to step into the new picture that has developed automatically. The conditioned mindset CM still lingers next to its owner, the client’s father P. The client’s mother M appears next to the father and further to the left the client’s brother B. Intuition IN and intellect IT place themselves next to the focus, left and right respectively. The miracle M is located on the right side of the picture and perceives itself disconnected with no clear mission.

The host interrupts the projection to asks the client about his brother. Since he was not mentioned in the introduction and the system gives him appearance, there must be something to him that is worth to be mentioned. The client tells the tragic story of his elder brother, who died at the age of 25 during a summit rally in the Alps. After he was found by the Alpine rescue team he is brought back to the family in a tin coffin. The parents were not allowed to see their son a last time, because the coffin was not allowed to be opened again. The host interprets this account as a lastingly painful experience for client’s parents. Apart from the grief over the son’s death, the parents were not allowed to say goodbye to their deceased son. That violation of basic mourning rules seemed to have affected both the parent’s capability to love their second son, the client. Especially the mother appears as representative very cold and distanced.

The host initiates therefore a symbolic pain return ritual with pillows. The client’s father as well as his mother have to take two pillows for their incapability to love their son as he would have deserved it, and thus destroying his natural intuition, and burdening his intellect as the only guiding and protective life force. The client turned in lack of love into a brain dominated human that lacked direction and guidance in life, because intuition was never allowed to develop.

The miracle enables a symbolic reconciliation between the two brothers. They forgive each other and the client’s elder brother asks him to succeed for himself and for him. He apologizes for having brought so much pain into his brother’s life and takes another pillow for the misery that he has caused. 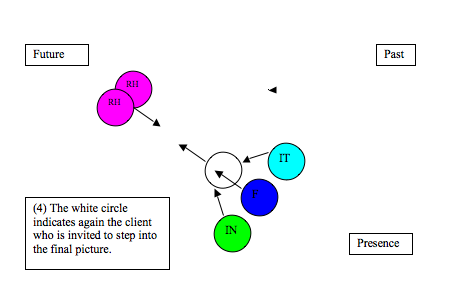 The definition of the location of the future to complete the time line introduction changes the picture again radically. The two representatives for recognition and happiness almost melt into one character and clearly take over the role of the goal, thus erasing the definition of success as goal, as they take position close to the future and directly in the present-future timeline view of the focus. The focus moves on the timeline between presence and future directing his view towards the new goal. Intuition and mind take positions next to the focus, left and right respectively.

Regarding the timeline it is remarkable how the conditioned mindset blocked the client’s perspective. In picture (2) as well as (3) the focus looks to the father and the conditioned mindset “We also have such a looser.” That equals the past; whereas recognition and happiness representing goal and future for a healthy personal development are ignored and not in vista. Picture (4) shows how the timeline has turned into a new direction and how the focus is liberated to look into the future and his goal recognition and happiness.

It is obvious that the client would without understanding the reasons for his disorientation continue to walk his life into the wrong direction. His goal would be out of focus and he would continue to walk away from the past but still being concentrated on it. With the introduction of the timeline it was possible for the focus to redirect his life and by finding his intuition he is able to concentrate on his goal, that is recognition and happiness.

It seems to be important to highlight that a lack of intuition caused by some love deficiency in an earlier life phase is a recurring topic for many clients, eventually manifesting itself in ones professional carreer and therefore not being associated with an usually very intimate cause in ones originating family (Herkunftsfamilie). Ω