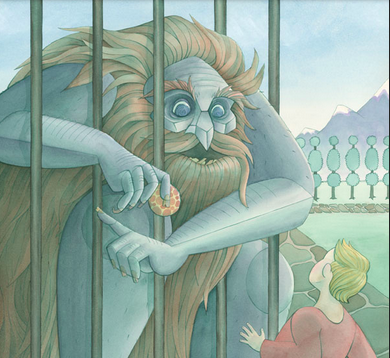 One can be cynical about Iron John, indeed. Yes, it’s a bit like Carlos Castaneda’s Don Juan accounts. But wasn’t that a cool dude? Yes, its fuzzy. But who expects a poet to write like a scientist? Yes, Bly wrote Iron John after his 24-year marriage to award winning essayist Carol Bly ended 1979 in divorce. But isn’t this book a constructive way to digest those years and man’s identity in general? If a piece of literature, which is written in a novel style like Iron John, stays for 62 weeks on the NYT bestseller list, then it must have strung a chord with a wide readership - not male only – and must be put on compulsory reading lists for generations to come. I was lucky to get the recommendation.

The NYT bestseller list finds for reasons of brevity only one sentence to describe Iron John: The passage of the male from boyhood into manhood, as practiced in various cultures. The book is though so much more. In style it is a marvelous and to me novel blend of non fiction and poetry. It is an encyclopedia of tales, legends and myths which span from Homer to the Brothers Grimm, from the South American Hopis to the North American Senecas, from Pre-Christian Celtic culture to the roots of Hinduism. In contents it touches deep on the essence of man’s psyche with eloquent reference to Freud, Reich and in particular Jung. Bly somehow manages to cut through the subjects of psychology, education and religion with the blade of a poet and creates from the resulting slumps a, yes, fuzzy, but beautiful new body of thought.

It is not a coincidence, I think, that Martin E. Seligman, by some called the modern father of positive psychology, published in the same year as Iron John a popular scientific volume titled Learned Optimism. He writes there that most of the developed world experiences an unprecedented epidemic of depression – particularly among young people. Why is that in a nation that has more money, more power, more records, more books, and more education, that depression should be so much more prevalent than it was when the nation was less prosperous and less powerful? He elaborates that three forces have converged: An inflated “I” failing in its own eyes relative to its goals; an erosion of the “WE”, i.e. faith in God, community, nation, and the large extended family give way to the I; and the self-esteem movement.

Seligman did without doubt point at a very important development in the affluent West, and was at center stage to develop the probably single most important and most widely recognized psychotherapy method, the cognitive behavioral therapy, but he did miss an important point, which Bly understood very well: positive thought and thus constructive behavior alone can’t make up for a culture which does not satisfy our human needs in terms of developmental psychology. Bly might not have been familiar with the theories of Erik Erickson or Jean Liedlhoff, but he clearly observed that the progress of the industrial revolution did deprive society of essential characteristics which make man (and woman) whole and sane.

What he observed throughout the 1980s in an America which experienced the third Industrial Revolution in full swing is still true today: The traditional way of raising sons, which lasted for thousands and thousands of years, amounted to fathers and sons living in close – murderously close – proximity, while the father taught the son a trade: perhaps farming or carpentry or blacksmithing or tailoring. As I’ve suggested elsewhere, the love unit most damaged by the Industrial Revolution has been the father-son bond. […] The grief in men has been increasing steadily since the start of the Industrial Revolution and the grief has reached a depth now that cannot be ignored.’, he writes somewhere else without knowing that about 30 years later mental health data in most industrial nations confirms this grief with a 3:1 men-women-ratio in suicides - in many societies as the second most frequent cause of death.

Bly writes in Iron John at length about a missing element in modern culture, which is the ritual of initiation. He writes only about the male initiation, but explains that initiation is universal to the human species and falls victim to the social changes brought upon the Industrial Revolution, the separation of labor and the substitution of small communities with large societies. The fault of the nuclear family today isn’t so much that it’s crazy and full of double binds (that’s true in communes and corporate offices too – in fact, in any group). The fault is that the old men outside the nuclear family no longer offer an effective way for the son to break his link with his parents without doing harm to himself. […] Much of that chance or incidental mingling has ended. Men’s clubs and societies have steadily disappeared. Grandfathers live in Phoenix or the old people’s home, and many boys experience only the companionship of other boys their age who, from the point of view of the old initiators, know nothing at all. […] The German psychologist Alexander Mitscherlich writes about this father-son crisis in his book called Society Without the Father. The gist of his idea is that if the son does not actually see what his father does during the day and through all the seasons of the year, a hole will appear in the son’s psyche and the hole will fill with demons who tell him that his father’s work is evil and that the father is evil.

Bly’s insights have therefore rightly led to an entire mythopoetic movement which builds on the assumption that men of all ages, but in particular the adolescent and the third age man have to come closer again to, well, mend traumas, forge identity and develop suitable roles for 21st century mankind. However, I feel that such a holistic psychology approach of going on retreats with likeminded men or meet regularly in self help groups, can only late in life satisfy some, if any needs at all. Men, aged 35 to 50, working on the separation from their parents, which they were not able to undergo due to lack of initiation, are, yes, deplorable, but shouldn’t be a social norm. Coolness, which Bly uncovers as a mask of the uninitiated men who lack empathy, shall not be an accepted behavior, even if the newly elected US president displays it as daily routine.

A genuine change in culture, is what is actually required to experience true brotherhood, not only amongst men, but in society at large at the respective age of evolutionarily defined psychological development. There is a strong need to internalize this feeling of brotherhood, which most of us, growing up as automatons in mechanized societies, don’t know at all. War correspondent Sebastian Junger describes the power of and the addiction to brotherhood, which soldiers face once deprived of it in civil society. They idealize war and want to get back into combat asap. No, I don’t idealize war, but I point at the connection between genuine brotherhood and altruism as formulated in many religions e.g. in the Christian Great Commandment Thou shalt love thy neighbor as thyself. Bly extends his analysis specifically to the work environment. Contemporary business life allows competitive relationships only, in which the major emotions are anxiety, tension, loneliness, rivalry, and fear. After work what do men do? Collect in a bar to hold light conversations over light beer, unities which are broken off whenever a young woman comes by or touches the brim of someone’s cowboy hat. Having no soul union with other men can be the most damaging wound of all.

Iron John is not cool and superficially strong, but wild and deeply emphatic. Bly writes that mythological systems associate hair with the instinctive and the sexual and the primitive. What I’m suggesting, then, is that every modern male has, lying at the bottom of his psyche, a large, primitive being covered with hair down to his feet. Making contact with this Wild Man is the step the Eighties male or the Nineties male has yet to take. The 21st century Western male tried to fill this void superficially with the full beard hipster movement, but most women clearly sense that fragile boys loom behind the hairiness. That’s why some women recently posted on facebook pictures of full beard hipsters with the caption: Don’t try to look like Iron John, if you can’t kill an animal.

Its not about the hair. Its about being wild, i.e. courageous. And there we have a problem in the post-modern Western world which is still stuck in its collective unconscious Judeo-Christian mindset. Bly explains, that the ethical superstructure of popular Christianity does not support the Wild Man, though there is some suggestion that Christ himself did. The metaphysical superstructure of the Judeo-Christian tradition is dualistic in its essence, therefore the Wild Man is considered as a whole evil and as such physical desires are in their entirety if not straight out sinful, then at least weird. Jesus was a mystic who recognized that dualism is only a method of the analytical mind to describe the spiritual and moral world. He never condemned anybody in his entirety, knowing that there are more than 50 shades of grey.

Bly writes somewhere else that ‘If the wild man returns to his forest while the boy remains in the castle, the fundamental historical split in the psyche between primitive man and the civilized man would reestablish itself in the boy.’ The wild man can probably be understood as the incarnation of the Freudian it, which we have pushed in its entirety into hell, whereas our superegos save us to heaven. Quite the opposite is the consequence. Bly continues: Eventually a man needs to throw off all indoctrination and begin to discover for himself what the father is and what masculinity is. For that task, ancient stories are a good help, because they are free of modern psychological prejudices, because they have endured the scrutiny of generations of women and men, and because they give both the light and dark sides of manhood, the admirable and the dangerous. Their model is not a perfect man, nor an overly spiritual man.
Proudly powered by Weebly