On Nutrition and Individual Economics

Nutrition is not only a chemical, but also a social science. It is not only about what you eat and how it affects your body; it’s also about how you eat, in particular with whom and in which mood. Like with all drugs, open the gates when in jolly company; shut them when in gloomy isolation.

There is no love sincerer than the love of food. [George Bernhard Shaw]

You are what you eat

we eat at least three times a day. not much else but sleeping is of such importance to us like eating - even if we engage in both only to create offspring in a strictly biological sense. but what do we actually know about food or sleep? nutrition has become quite a fashionable mainstream topic to talk about during recent years. sleep is still a dark matter to most of us. I have been my own guinea pig during the last two decades and I want to share with you what I have discovered by both indulging and living like a hermit.
one word of caution: all our human bodies might have a common denominator in the way we digest the foods that we ingest, but each body has its own peculiarities. therefore all information provided here not necessarily applies to each one of us in exactly the way that I describe it.

One can not think well, sleep well, love well, if one has not dined well. [Virginia Woolf]

I would like to start with some resources on the topic of nutrition that are rather self explanatory. Watch these films and read these books:

There are two kinds of animals on earth. One kind minds his own business, the other minds other people‘s business. The former are vegetarians, like cows, sheep and thinking men. The latter are carnivorous, like hawks, tigers and men of action. [Lin Yutang]

Life expectancy is usually associated with a comparison between different countries like shown in this map. But it seems much more interesting to look at below diagram, which shows on the correlation between physical functionality and life expectancy of German's population in 1990. Line 4 visualizes "normal aging" which includes some reduction of physical functionality starting at the age of 70 and rather immediate death around 90. Line 2 visualizes the more and more common life path of people from risk groups which are commonly found in affluent societies (high blood pressure, frequent nicotine and alcohol users, high blood fats). These persons suffer considerable limitations of the physical functionality in their 40ies and 50ies and have a high likelihood to die around 65. Line 5 visualizes the ideal life path which is also described in Dan Buttner's TED talk about "Blue Zones": life with almost no limitations until a sudden death at age 100+. 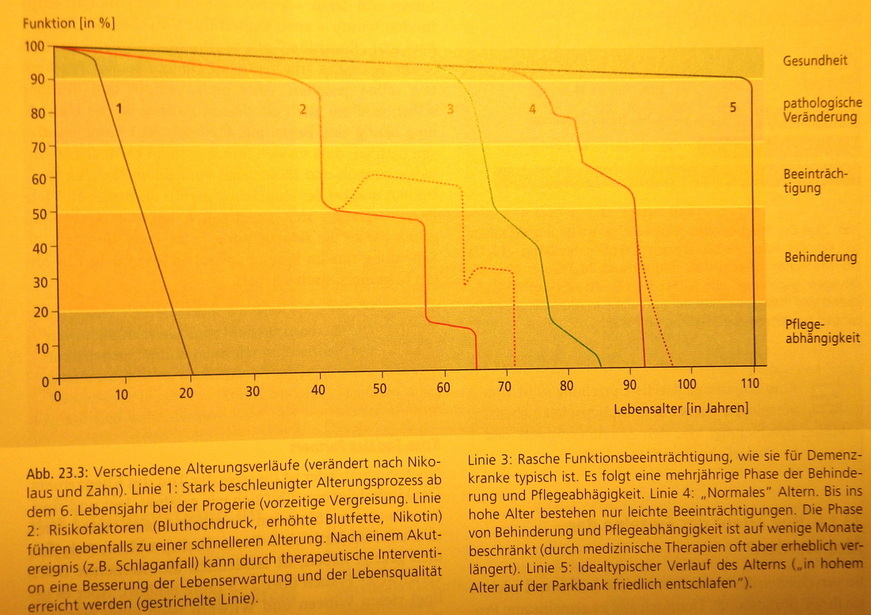 Recently, there has been found scientific evidence that there is a connection between our antibiotics consumption and autism. "The Autism Enigma" follows the work of an international group of scientists researching the human intestine and the clues their work might hold for treating and perhaps preventing this baffling disorder. Watch the documentary and continue reading on these sites:
http://cogentbenger.com/autism/interviews/finegold-interview/
http://bacteriaandautism.com/
It can be deducted from these findings that wrong nutrition causes mental illness or at least pathological behavior. Another argument in favor of psychosomatic medicine. There is also growing evidence that antibiotics are causal to most allergies which mankind suffers in industrial nations.
Proudly powered by Weebly