lack of mutual respect in a team

Annabelle is a French woman in her early thirties. She works as an actress-director with a small theatre. When we sit together and I ask the round of convened people to reflect on the past weeks, what has happened, what made them feel happy, what made them feel bad, and what they would like to prioritize for a change during the coming weeks, most of them articulate one problem. Annabelle starts to cry when she tells us about the pressure that she experiences at work. There are some of her actors that she can’t really cope with, they don’t show her respect and make it even more difficult as it actually already is. Annabelle yields to a lot of pressure that makes her sick, sick to the point of giving up. What worries her most is the kind of character that is revealed in such situations of pressure, when she uses her directness and addresses urgent situations, but her actors and colleagues don’t take her serious - in particular Dio, Marc, Selim and Magali. Then she explodes and turns into a burning valkyrie full of anger. She hates that new self of hers and wants to find a way of reacting better and being more controlled.

After asking her several questions trying to identify resources that might be of value to tackle her problems we end up in choosing following characters and elements.
Annabelle A
Respect from her colleagues R
Honesty and Directness HD
Leadership L
Self Confidence SC
Pressure/Anger PA
Dio D
Marc M
Selim S
Magali M 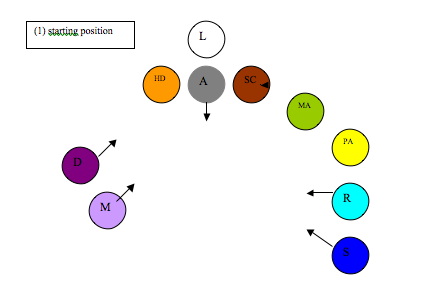 Dio, Marc and Magali feel threatened by the army that has formed around Annabelle. Leadership strengthening her back and flanked by Honesty and Directness, as well as self confidence. Magali is allowed to find her own place and takes position next to them. Selim obviously pays more respect to Annabelle than the others since he has a stronger connection with her respect. Nevertheless the group of colleagues contfront A. 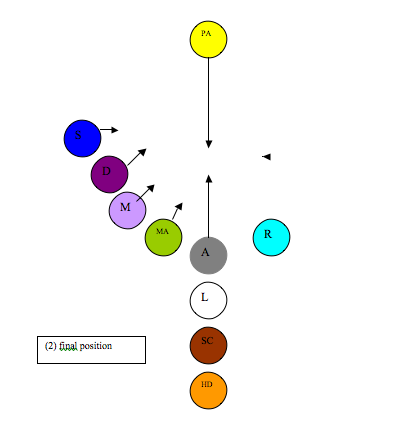 In the end Annabelle and her actors form a phalanx against pressure and anxiety. Together they can succeed and therefore not trigger Annabelle’s anger. In order to form a team with her, Annabelle will nevertheless also pay more respect to her colleagues and try not to confront them too directly. The projection clearly revealed that not only Annabelle is in need of respect but also her actors. If she brings more respect upon them, they will respect her in return. Ω
Proudly powered by Weebly