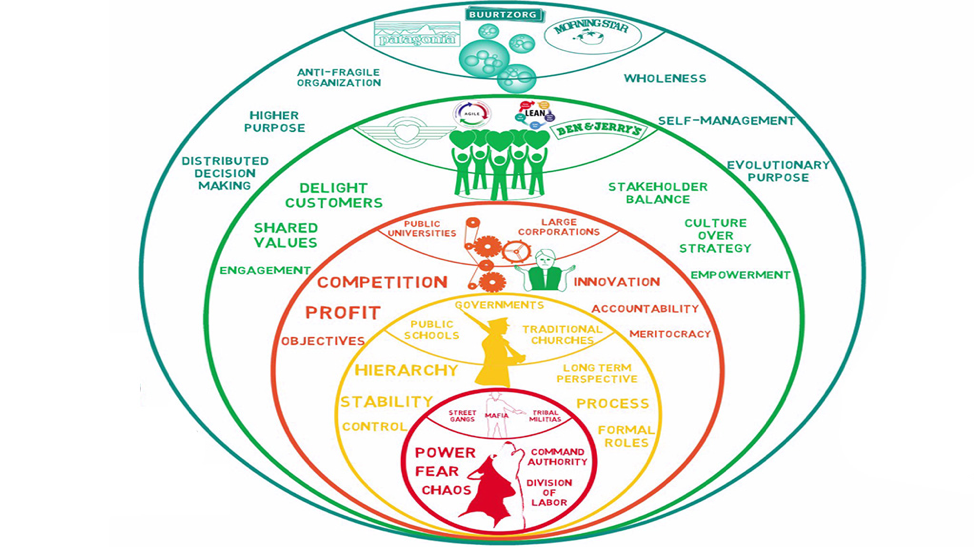 Frederic Laloux, a Belgian organizational consultant and author of Reinventing Organizations, has accomplished something extraordinary: he applied Ken Wilber’s groundbreaking Integral Metatheory on corporate organizations. He has done so in the manner of an erudite sociologist analyzing organizational structures and individual behavior. He has done so in a scientific method drawing on a wide spectrum of research objects from which he deducts in a most logical way his conclusions for the next stage of organizations: Teal.

All this is great news and Laloux makes a clear case for a necessary evolution of organizations no matter which size and no matter which type. The problem with his analysis: he does not include one of the most important forms of organizations, the startup. A startup in the words of Ethereum founder Vitalik Buterin is a deeply orange if not even red organization and there is no way to make it teal: The optimal governance structure for early-stage projects is founder dictatorship. The optimal governance structure for mature projects has large user/stakeholder involvement.

Widely read, super smart university drop out Ken Wilber, one of the founding fathers of transpersonal psychology, coined the term Integral Metatheory to explain the evolution of societies and make sense of the chaos which we call human history. The below table shows that societies develop like human beings from early stages in which basic needs must be satisfied by all means with a short-term mindset, into gradually more sophisticated civilizations which are capable of long-term planning and increasingly more tolerance to different worldviews. 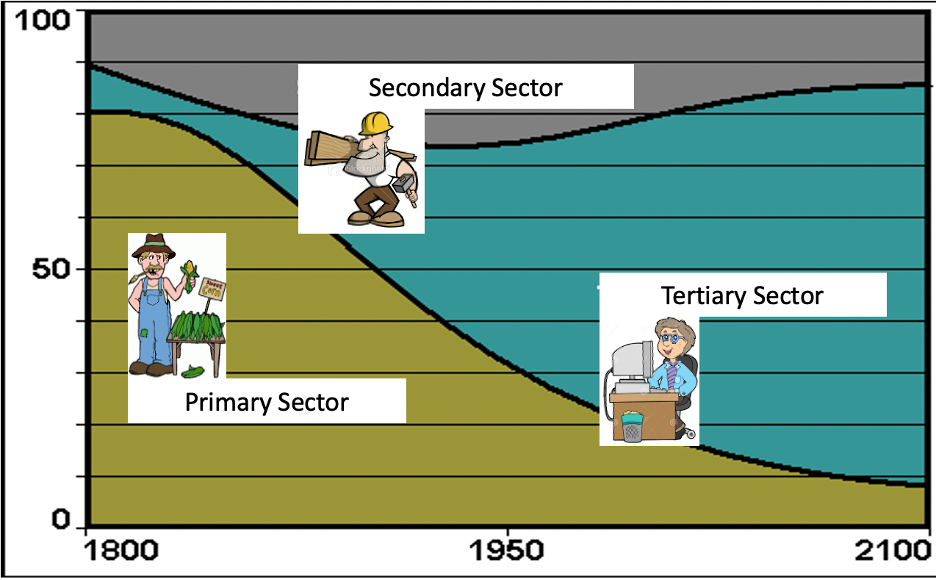 Each development stage in Wilber’s Integral Metatheory reflects a certain form of social organization and is coded with a color. Wilber calls the last stage of social development, which started in the 1990 Integral and attached to it the color turquoise. Laloux builds on Wilber’s findings and applies them to corporations and non-profits. He explains that organizations as we know them are a very recent phenomenon. For the majority of history of our species, we were busy hunting and gathering, which we can safely assume didn’t involve email overload and tedious budgeting meetings. In the overall scope of things, it wasn’t long ago that we switched to the age of agriculture, and even then, organizations rarely spanned beyond family structures. It was only with the Industrial Revolution that organizations began to employ a large share of human resources. Management as a field of academic interest really only blossomed in the last 50 years.

In a broad generalization, it is safe to say that, in developed societies, Impulsive-Red Organizations persist only at the fringes of legal activity. Conformist-Amber is still heavily present in government agencies, the military, religious organizations, and public-school systems. Achievement-Orange is clearly the dominant paradigm of business corporations, from Wall Street to Main Street. Pluralistic-Green organizational practices are making increasing inroads, not only in the world of nonprofits, but in the business sector as well. It is though clear that a new model is about to emerge. 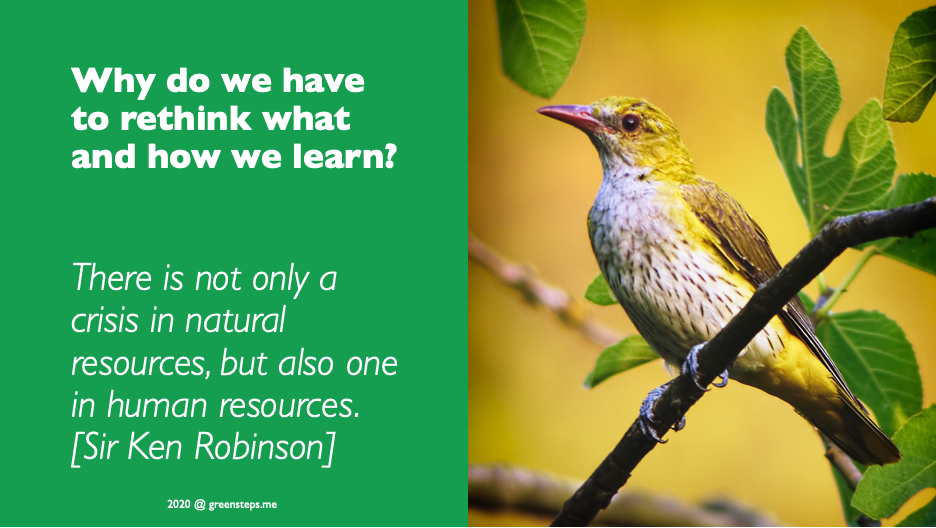 Teal – the next stage of organizational consciousness

The emerging model is called by some systemic theorists and organizational consultants integral-Teal and is defined by three factors which differentiate it from all previous organizational models.


The pages of Reinventing Organizations, however ingenious its starting point, didn’t start turning. The book had been recommended to me in early 2017 by a fellow organizational development practitioner, but it sat on my shelf after reading the introduction literally for years. Whenever I picked it up it felt as a tedious read causing me to skip chapters and take in summaries or tables only. Was I a believer who is being proselytized? Towards the end of this three-year ordeal I realized that there is another reason for why my consciousness didn’t open up to Laloux’s work.

His strongly analytic and methodological observations overlook a single ground rule: Teal practices must include all others. Yes, Mr. Laloux concedes in chapter 1.2 that there is nothing inherently better about being at a higher level of development just as an adolescent is  no better than a toddler, but throughout his work we are exposed to a narrative of how to do it the Teal way. But the crucial takeaway for me is simply, that there are no Teal organizations which operate with Teal practices only; instead there are Teal organizations which operate on all levels of organizational development and on top of this in Teal.

The choice of Laloux’s research subjects does therefore probably exclude the spectrum of organizations which require more of amber, orange or green than any other stage of management practices in the respective organizational life cycle: the start-up. If a start-up is not driven by a visionary Napoleon, no matter how great the idea, it will never fly. I don’t want to be misunderstood: start-ups don’t need to be a wolf-pack which has homo homini lupus as modus operandi. But the wolf-pack can be also a positive metaphor for a team of warriors who fight for the right cause. The best argument in favor of this claim can be found in a simple quote from management guru Peter Drucker who wrote in The Essential Drucker:

One hears a great deal today (that is in the late 1990s) about the end of hierarchy. This is blatant nonsense. In any institution there has to be a final authority, that is, a boss – someone who can make the final decisions and who can expect them to be obeyed. In a situation of common peril – and every institution is likely to encounter it sooner or later – survival of all depends on clear command. If the ship goes down, the captain does not call a meeting, the captain gives an order. And if the ship is to be saved, everyone must obey the order, must know exactly where to go and what to do and do it without “participation” or argument. Hierarchy, and the unquestioning acceptance of it by everyone in the organization, is the only hope in a crisis. 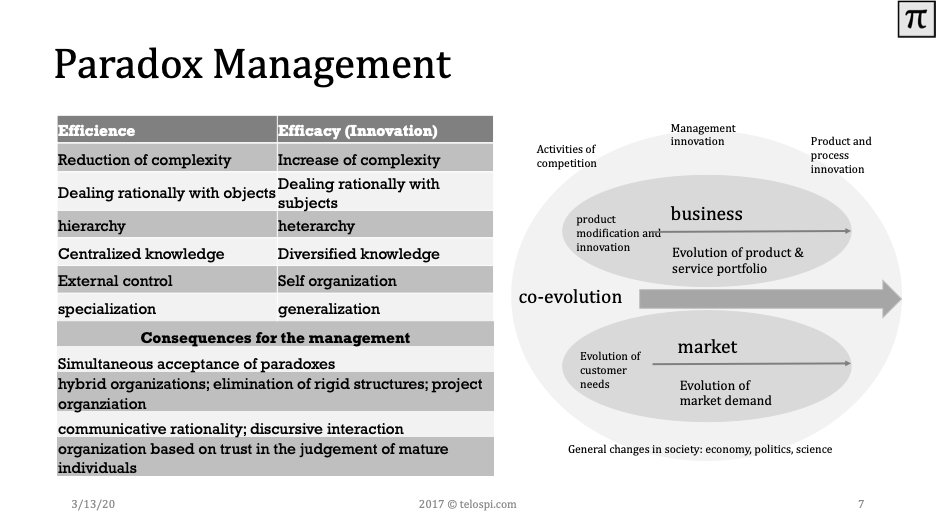 Other situations within the same institution require deliberation. Others still require teamwork – and so on. Organization theory assumes that institutions are homogenous and that, therefore, the entire enterprise should be organized the same way. But in any one enterprise – probably even in Fayol’s typical manufacturing company – there is the need for a number of different organizational structures coexisting side by side. What Drucker describes here is called paradox management by others: the forth and back shifting between different modes of operation in accordance with business development cycle stages as well as internal and external organizational conditions.

There is – or there must be – one right organization.

Drucker, it seems, has anticipated Teal organizations long ago and has realized something even more important: that there is no perfect organization. But it is this proselytizing tone in Laloux’s writing that Teal is the perfect organization which was not only to me disturbing. It’s a strange kind of takeaway that a book which is so upbeat and clearly tries to support the transformation of our organizations into something better than they are now, has left such an impression. Drucker explains:

Laloux’s book is a must read for anybody who wants to understand the big picture of organizational evolution and why the human being organizes itself in more and more complex forms of cooperation. It is however a very optimistic read which neglects much of human reality. Optimist shall read Laloux. Realists are better advised to read Francis Fukuyama’s The Great Disruption.

My pessimistic takeaway relates to the role of the organizational leader. Laloux asks: What determines which stage an organization operates from? It is the stage through which its leadership tends to look at the world. Consciously or unconsciously, leaders put in place organizational structures, practices, and cultures that make sense to them, that correspond to their way of dealing with the world.  This means that an organization cannot evolve beyond its leadership’s stage of development. Looking at the deeply orange structures which Xi Jinping ramps up in China, we require some sort of transformation which has never seen before.

My optimistic takeaway from Reinventing Organizations is the potential nature of organizations: That is the true genius of organizations: they can lift groups of people to punch above their weight, to achieve outcomes they could not have achieved on their own. This insight is a hopeful one in a time when we need the consciousness of Green and Teal Organizations to start healing the world of the wounds of modernity (= the orange mindset). Laloux concedes that cognitively, psychologically, and morally, moving on to a new stage is a massive feat. It requires courage to let go of old certainties and experiment with a new worldview … no one can be made to evolve in consciousness, even with the best of intentions … what can be done is to create environments that are conducive to growing into later stages. 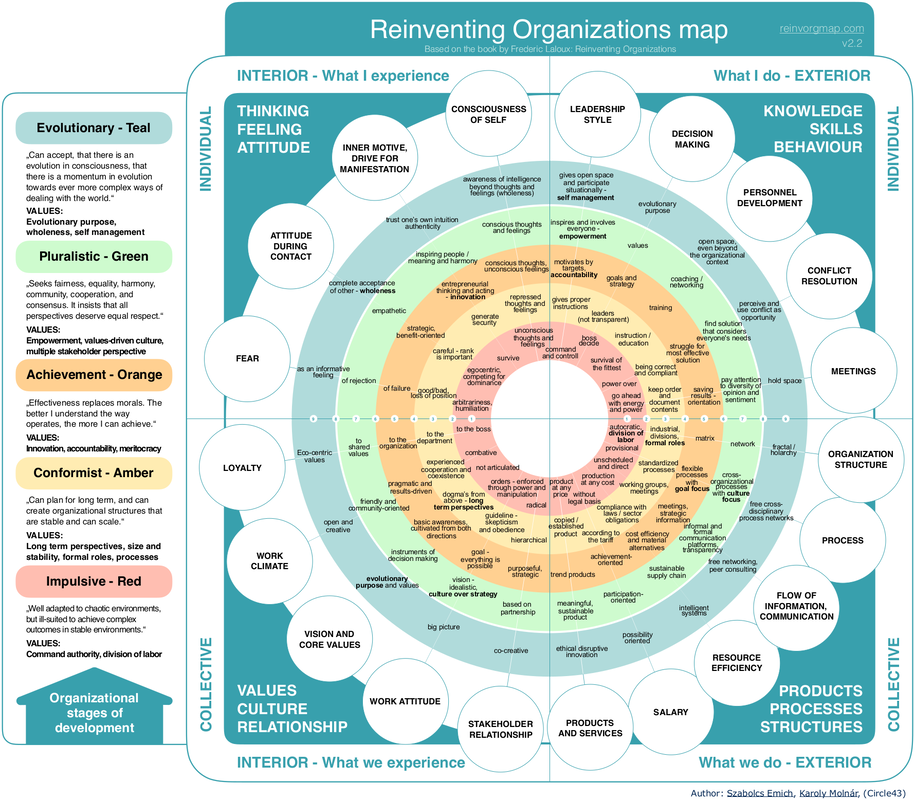